ABSTRACT: "Operators of sewer systems using non-pressure polyethylene and polypropylene pipes can expect the polyolefin products to have a service life of at least 100 years, according to a technical report published by the European Plastic Pipes and Fittings Association (TEPPFA)." Dec 2015.

ABSTRACT: "TruVue, the company has now revealed, utilizes a five-layer wall that includes polypropylene on both the inside and outside of the can. Two layers of adhesive bond that PP to a center EVOH layer that acts as an oxygen barrier." Feb 2016.

ABSTRACT: "The Plastics Group of America - a materials firm based in Woonsocket, R.I. - has added water-safe polypropylene compounds to its lineup... The new materials - sold under TPG's Polifil trade name - are based on homopolymer PP and are reinforced with chemically-coupled glass fibers. They also have NSF/ANSI certifications from NSF International and the American National Standards Institute." Oct 2015.

ABSTRACT: "While it is used all over the world as a light packaging and insulation material, EPS (expanded polystyrene) is a problem as waste. This is why VTT Technical Research Centre of Finland is currently developing an affordable and environmentally friendly alternative for polystyrene from PLA bioplastic, which is derived from organic sources." Dec 2014

ABSTRACT: "Accumulation of electronic waste has increased catastrophically and out of that various plastic resins constitute one of the leading thrown out materials in the electronic machinery. Enrichment medium, containing high impact polystyrene (HIPS) with decabromodiphenyl oxide and antimony trioxide as sole carbon source, was used to isolate microbial cultures. The viability of these cultures in the e-plastic containing mineral medium was further confirmed by triphenyl tetrazolium chloride (TTC) reduction test. Four cultures were identified by 16S rRNA sequencing as Enterobacter sp., Citrobacter sedlakii, Alcaligenes sp. and Brevundimonas diminuta. Biodegradation experiments were carried out in flask level and gelatin supplementation (0.1% w/v) along with HIPS had increased the degradation rate to a maximum of 12.4% (w/w) within 30 days. This is the first report for this kind of material. The comparison of FTIR, NMR, and TGA analysis of original and degraded e-plastic films revealed structural changes under microbial treatment. Polystyrene degradation intermediates in the culture supernatant were also detected using HPLC analysis. The gravity of biodegradation was validated by morphological changes under scanning electron microscope. All isolates displayed depolymerase activity to substantiate enzymatic degradation of e-plastic." Jun 2016

ABSTRACT: "...polycarbonates feature limited scratch and mar resistance, being characterized by very low surface hardness. This suggests the protection of polycarbonates with hard transparent coatings. However, poor interfacial adhesion between conventional coatings and polycarbonates, reduced cohesive strength of some hard coating materials and, in particular, their limited compliance when deposited on ductile substrates often reduce significantly their performance. In this respect, the present work analyzes the pros and cons of protecting thermoplastic polycarbonates with specialty coatings, emphasizing the real advantages of applying surface overlying layers and their drawbacks." Oct 2015 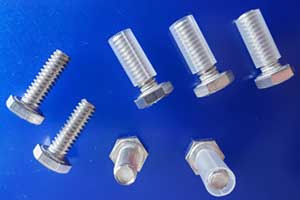